Case study - Placing the Suspect Behind the Keyboard

Not too long ago, I read an article where the state’s largest cocaine bust happened because the driver was stopped for speeding.  The first thing I thought was, “Speeding…yeah, right”.   So, I called a good friend of mine who I worked some cool drug cases with and asked if that was his case.  But of course it was.  The article read like cases we worked together for some years.   The case is public knowledge today, but in short, a year of investigative work resulted in ‘taking off’ lots of drugs and cash using pre-textual traffic stops as wall cases to keep the core case going.  We did that a lot and it was a lot of work.

My point in the story is that when you see a simple case publicized, there is usually a lot more that has happened behind the scenes that most people will ever know.  Some of this is intentional, such as when a small part of a case is ‘walled off’ to protect the core of an investigation and other times the work is so intensive that to start talking about it will (1) bore the listener to death and (2) talk a week to flush out the details.

So here comes a really cool case I just found to illustrate these points.  In brief, this case is a cyberstalking case that was righteous in all aspects in that the cyberstalker truly needed to be caught and that the work done was awesometacular.

I’ve taken a few snippets from the affidavit to discuss some of the notable investigative aspects of the case.  As a reminder, that what you read in the affidavit is like seeing the tip of the iceberg of a case.  There is so much more in a case like this that is not in the affidavit.  Having written more search warrant affidavits than I can count, I cannot imagine how much work was done on the case based on what was included for the affidavit.  Very cool.

Side Note:  Read the entire affidavit when you get a chance.  Flesh it out.  Read it like a novel.  What would you have done differently or better? 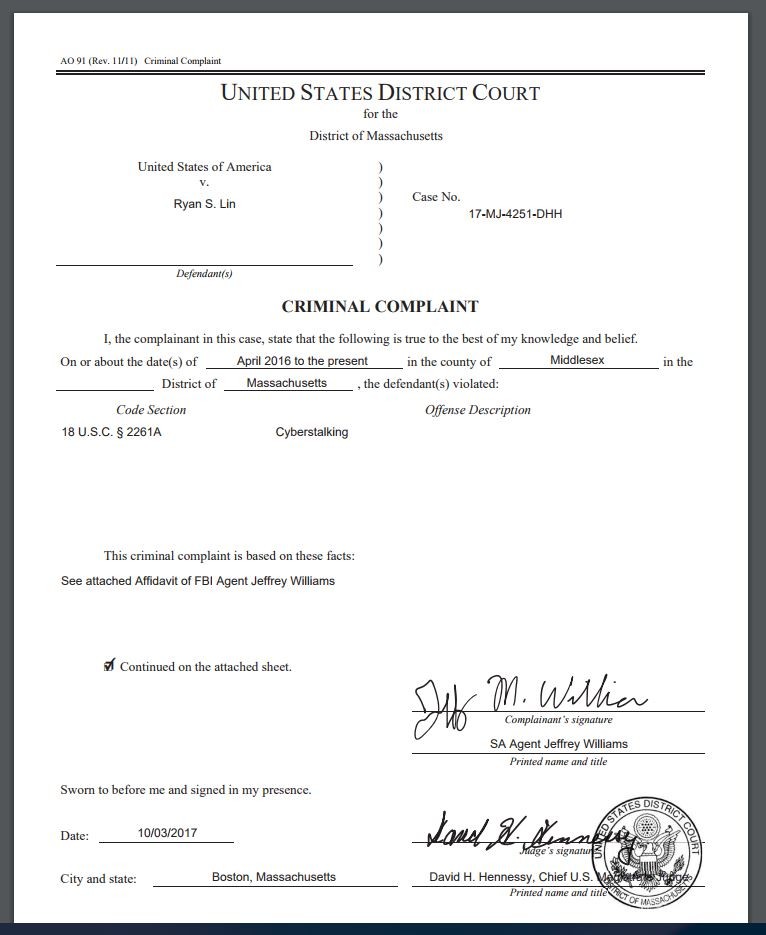 This is a key point. Either iCloud was hacked (as in a technical hack) or someone had access to the account physically (as in, someone who knew the victim and could have accessed her devices).  Eliminating the suspects who could hackers is impossible.  Eliminating suspects who are known to the victim is possible.

The suspect, “Lin”, erred in using variations of his name in social media accounts.  It’s only a clue, but important to build upon.  In all cyber cases, keep track of user names.  Sometimes there is a reason a username was chosen and perhaps clues to other information.   For each online service, such as Instagram, also consider that accessing each service can be done using many different devices from many different locations on many different occasions.  With each connection, the suspect risks being discovered either by his mistakes or service provider.  That means for you to look at every connection of every message, text, email, or login.

Not much was mentioned in how the anonymity was obtained, but again, each communication is a potential disclosure due to a suspect’s mistake.  Considering that the false flag in the Matthew Brown is known by the victim, the assumption is that the suspect is known to the victim and/or Brown.  This can narrow the list of potential suspects down.

I threw this in just as a reminder for employers (and to remind your clients!) to backup/image departing employee devices for a set time period, just in case.  This is also a reminder to employers that even if they think nothing is left on the computer, usually there is something.  I’ve come across this multiple times and in one case, the entire case was closed with a single forensic analysis on a reinstalled OS from a departing employee. 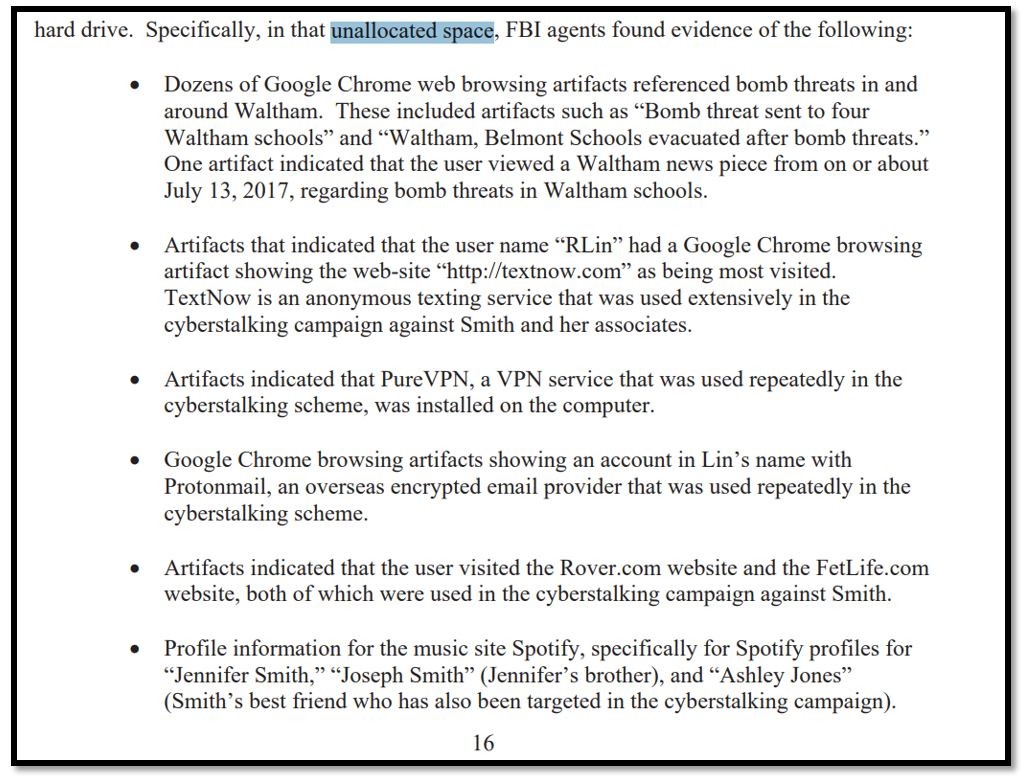 At this point, it’s easy to see that the suspect (Lin) is probably the guy.

The similarity in style and content from multiple accounts can be tied together, at least as being too similar to be a coincidence.  By itself, not enough to prove a crime/incident, but when taken in totality of all evidence, it is very important.

This would be called a “slip up” by the suspect.  When details known only to a few people are discussed, the list of potential suspects gets very short.

Again, if physical access is needed to commit a crime, the list of suspects can be shortened.

Never give up on uncovering someone because of technology being used for anonymity.   Keep at it.  Keep looking.  Keeping thinking.  Time and effort works for you.  Time works against the suspect.

Technically, this is called, “the suspect screwed up”.   But it took getting the records from Google, which required having the idea to do along with the labor to gather legal cause to request it.

Social engineering by the suspect.  Very creative.  However, it required the suspect to create a social media account, email account, and obtain a phone number.  Again, consider how many times he would need to connect to the Internet, from one or more devices, from one or more locations in order to do this.  Each act is a potential windfall of evidence when the suspect makes a mistake. You just have to check every connection known and find the mistake. It is there.  You have to look. 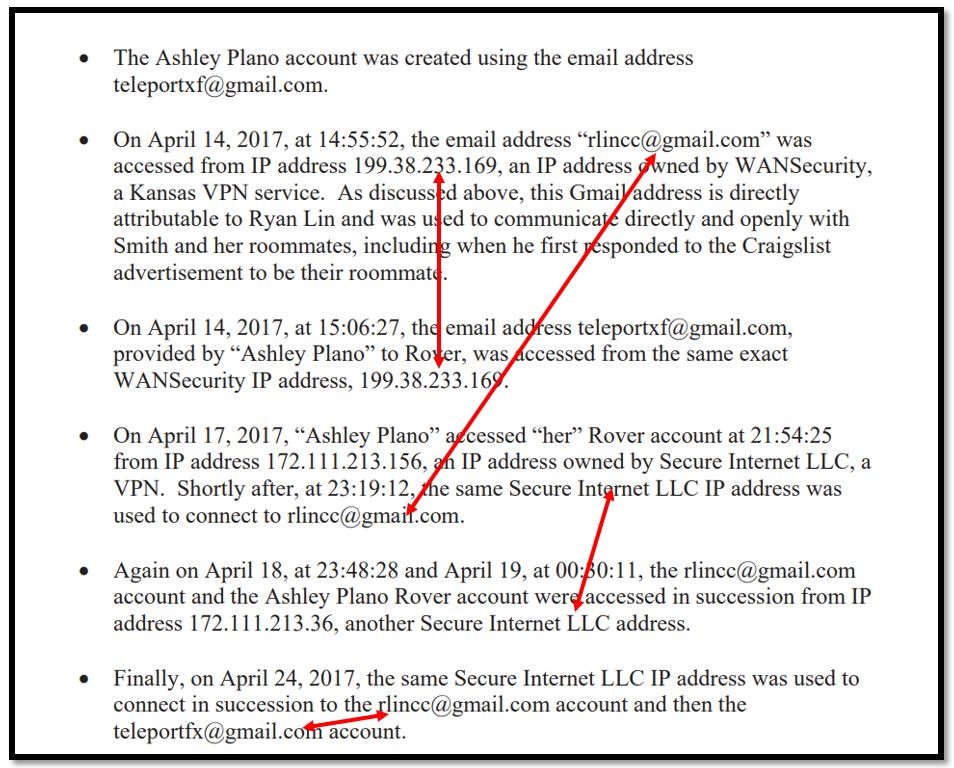 Again, when you have the “same” of anything in a case, do not discount it as a coincidence.  The same IP or the same email or the same username or the same style of writing can all point to the same suspect.

Search the devices to which you have access to either confirm or rule out suspects.  In this case, searching Lin’s previous workplace computer found evidence that linked him to the crimes he was committing using other devices.

Not conclusive, but when you put all the evidence together, no one will see anything other than Lin as the suspect because of being overwhelmed with the little things, like this, that point to him.

Past behavior is a good indicator of future performance/behavior.  In Lin’s case, based on his past behavior, I would say that this is what he is: a cyberstalker.  Once you read the entire affidavit, you’ll see what I mean.

Here’s my take on the case.

The timespan was lengthy, and there isn’t a lot you can do about that.  I don’t know the details of how many people or agencies worked the case, but I can imagine that there were a few (maybe one or two) who spent a lot of time on it, bantered back and forth on the best way to work it, suffered through a lot of investigative failures and wasted time*, and worked hard to get resources to put the case together.

I can imagine the number of court and administrative orders to obtain the records of all the social media services, ISP records, and phone logs being overwhelming at times.  That is the way it is, so in that aspect, don’t feel like any one case is getting you down more than another case.  I would hope that every user account that the suspect used was investigated, including the “anonymous” accounts.   Other cases have shown that even when a third-party provider promises anonymity, they don’t really mean it.  You will never know until you ask and you will never know what great evidence you can get without asking for it.

I’m not plugging the books I wrote for these types of cases, but if you get these kind of cases, check out the books for some tips.  They are in a lot of libraries, easy to buy online, and the main point I work to get across is to find the one thing that will make your case.

On Oct 17, I am giving a short webinar on Placing the Suspect Behind the Keyboard.  If you stick around for the entire half hour, you’ll get a printable cert of attendance that you can take back to your employer for training credit to justify the time to join during work.   And also, if you stick it out to the end (it’s only a half hour…..), I’m giving a discount to the 13-hour online course that is the biggest I’ve ever done.  $45 for the entire $799 course.   But the promo will only be good for an hour after the webinar, and only for 100 attendees in the webinar; meaning that you’ll have to sign up right away if you want the course.

Be sure to add your name to the webinar here: Register

If you are like me, you like to dig.  You like to find out whodidit.  You want to put together a good case.  And most importantly, you want to stop bad people doing bad things to good people.  Isn’t that the point of all this?

*Sarcastically I said “wasted time”. I mean that time spent without a positive result may seem like wasted time, but it is not, since you have to spend time investigating and much of it results in not much forward movement of the case.  Accept the time spent feeling like you are running in circles as part of what it takes to get it done.